ENGIE has a presence in South Africa since 1994, specifically in energy efficiency services, and is the country’s number 1 independent power producer. The Group aims to support the government in defining a balanced energy mix based on renewable energies (solar energy, wind power) and natural gas.

With a population of 52 million and an estimated GDP of USD 350 billion accounting for more than 25% of GDP in sub-Saharan, South Africa is the second largest economy in Africa after Nigeria. In the energy sector, the country is the biggest electricity market in Africa, with an installed power generation capacity of more than 45 GW, but it still struggles with under-production. Some 25% of the population does not have access to electricity and the distribution grid suffers from under-capacity, exposing the country and industrial companies to frequent load-shedding risks.
In its COP21 contribution to take on energy transition, South Africa reasserts the commitment it made in Copenhagen to reduce CO2 emissions by 34% by 2020 and 42% by 2025 compared to a “business as usual” scenario. To reach these targets, the country is establishing a carbon tax, implementing precise regulatory limits for each sector of the economy and modifying its energy mix, specifically by developing renewable energies and replacing coal-fired power plants.

ENGIE is ideally placed to address this challenge: it has had a presence in South Africa since 1994 – specifically in energy efficiency services – and is the country’s number 1 independent power producer.

The Group aims to support the government in defining a balanced energy mix based on renewable energies and natural gas.

Construction of the wind farm began end-2013 and was commissioned in June 2015 for 20 years. This will result in 5.6 million tonnes of CO2 emission saved during that period.

The shareholding in Aurora Wind Power is held by ENGIE (43%), Investec Bank (34.5%), Kagiso Tiso Holdings (20%) and Omoya Power (2,5%). Other parties involved in the project are the EPC contractor Vestas SA, and the owner’s Engineer, Tractebel.

In accordance with the rules currently applicable in South Africa, 2.5% of the investment is ultimately held by a local community trust through a wholly owned project company, in this instance Omoya Power.

The Kathu Concentrated Solar Power park in in theNorthern Cape Province) has an installed capacity of 100 MW.

The plant uses parabolic trough technology and is equipped with a molten salt storage system that provides 4.5 hours of battery life, thus helping to offset the intermittent nature of solar energy.

The shareholders of Kathu Solar Park comprises a group of investors, including ENGIE (48.5%), SIOC Community Development Trust (12.5%), Investec Bank (7.5%), Lereko Metier (11.5%),Public Investment Corporation (17.5%) and Local Community (2.5%). The consortium was given “preferred bidder” status in January 2015 and financial close was reached in May 2016.

Construction of the CSP plant started mid-2016 and the plant started commercial operation beginning of 2019 after which it will be in operation for a 20 year period under the Power Purchase Agreement.

ENGIE is operating two thermal power plants in South Africa: the Dedisa and Avon peaking power plants (with a total capacity of 1,005MW).

A 15-year power purchase agreement was signed with Eskom Holdings (the buyer).

The Dedisa plant is essential for the development of the 11,500 hectare industrial development zone in Port Elizabeth, specifically for key sectors such as metalworking and aquaculture. This power plant is one of the biggest investments in the zone and has created 1,500 direct jobs and 1,000 indirect jobs in a region highly impacted by unemployment.

Thermaire (Pty) Ltd and Ampair (Pty) Ltd are affiliaed companies working together to offer joint installation, maintenance and guarantee HVAC contracts. They have built strong partnerships with customers present in a large variety of activities including power plants, commercial buildings, shoppingmalls and data centers. With Thermaire and Ampair, ENGIE aims to develop a regional platform to offer energy services to the public, industrial and commercial building sectors.

In South Africa ENGIE supports the Valued Citizens Initiative, a non-governmental organization which organizes educational support and social programs in public schools, including in Saldanha Bay near the Aurora Wind Power. The NGO encourages personal development and civic engagement within a democratic context.

The ENGIE Foundation has also been a partner to the Valued Citizens Initiative since 2002 in its campaigns to support education and youth.

The ENGIE Foundation has been funding the Inspire program since 2009. This project helps girls develop their leadership skills, expand their horizons and take control of their lives, while fighting gender inequality and poverty in their communities. To that end, the association organizes leadership training camps for 50 disadvantaged girls and 50 girls recognized as leaders in their schools.
The girls must then organize a citizenship project in their school involving other pupils. The ENGIE Foundation funds this program in KwaZulu Natal province, where the Group is located. Every year it benefits 100 girls aged 14-16 directly and around 7,000 young people indirectly (thanks to the reach of Inspire Clubs in schools). All in all, more than 600 girls have been helped directly since 2009 thanks to ENGIE’s support.

Social programmes have been set up near the sites of the Avon and Dedisa power plants. ENGIE established an independent fund to ensure that local black organizations and communities can benefit from these projects. The Peaker Trust holds a 10% stake in the project companies; it was created to fund social and educational programmes. All of the Trust’s dividends will go to local socioeconomic development initiatives for at least 15 years, for the entire duration of the power purchase agreements. 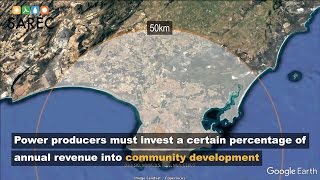 Discover all ENGIE’s businesses in Africa